“At the breast of history I sucked and pissed.”

A conceptual cabaret of collaborative projects among visual, performance, and performing artists. Opera, theatre, burlesque and contemporary dance that burrow into a bewildering range of topics: the force of capitalism in Europe’s financial and humanitarian crisis; the sexual and political agency of women from the age of myth and biblical tales to Surrealism and the Cultural Revolution; the fabrication of discourse in the artist interview format. Featuring Nadim Abbas, Orit Ben-Shitrit (video artist/choreographer), Rainer Ganahl, Mary Notari (activist/stage actress), Tuo Wang, Zhang Hongtu, Mo Zhou (theatre/opera director), among other musicians, designers, composers, and performers.

House of Flying Boobs is a performance art cabaret interweaving four distinct acts that straddle several visual and performing arts genres. Operating at the conceptual chasm that still exists between the increasingly “professionalized” performance art practice and the constantly reinvented disciplines of opera, dance, comedy and theatre, House of Flying Boobs brings together young artists from diverse cultural and professional backgrounds who calibrate disciplinary-specific practices for a radical expansion in the expressive and critical bandwidth of performance art, engaging the audience through provocation as well as pleasure. 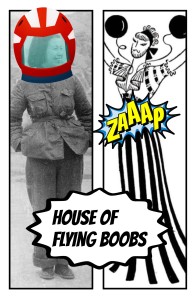 In Les Mamelles de Tirésias, Francis Poulenc’s surrealist post-WWII opera adapted from Guillaume Appolinaire’s eponymous play from 1917, the protagonist’s breasts flew off as balloons and set in motion a revolution in gender roles and societal morale. Capitalizing on that momentum, HOUSE OF FLYING BOOBS mines literal and metaphorical references to “breasts” in the classical opera repertoire, ranging from Salome’s lustful tribute to Jochanaan (Strauss), Iole’s caution against passion (“banish love from thy breast” in Handel’s Hercules), to Jiang Qing’s resounding proclamation for her political ambition in Nixon in China (Adams). Casting new light on these characters at their psychoanalytic climax, the re-arranged, five-act operetta explores the rich spectrum of female desire and agency in relation to the anachronistic landscape of global feminism today.

AUCTIONING OFF THE GREEK DEBT, originally conceived and performed in 2012, negotiates the European debt crisis by creating a new financial tool—a commodity derivative—by the two most powerful entities in the EU: Germany and France. Three dancers: German, French and Greek enact an abstract financial scenario involving language. The qualities of the Greek dancer are bundled and sold as commodity derivatives by Germany and France. All is told through choreographed movement, combined with language phrases spoken with an economy of consonants—in each of the three dancer’s respective languages. The performance, now restaged with an uncanny sense of relevancy, is a set of actions that trigger a chain of responses and interweave/interfere with the cabaret’s various acts. The performers punch a time clock to underscore the movement transactions. Conceived and choreographed by Orit Ben-Shitrit.

Modeling after Between Two Ferns, the popular web-series of awkwardly offensive and politically incorrect interviews with A-list celebrities, BETWEEN TWO DICKS takes on the highly performed, strategized, and often scripted nature of public interviews, lectures, and panels in the art world. By posing irritatingly candid, uncomfortable yet deeply relevant questions for established male professionals in the art world, BTD functions as an artist-interview jamming that questions the kind of discourse performed and fabricated through the format of artist interviews/panels, undermining its suave rhetoric and opaqueness to “get to the bottom of things”. Conceived by Wang Tuo. Interviewee for the showcase: a white, male artist activist from The Yes Men group, artists Rainer Ganahl and Zhang Hongtu.

CATCALL is an experiment in drag, clown, and burlesque that invites and subsequently devours the male gaze. Embracing gender constructs and using self-reflective satire, the artist strips bare—literally—the institutionalized and internalized misogyny of daily and professional life. Conceived of and performed by Mary Notari.

Working with video, photography, performance and choreography, the Brooklyn-based Orit Ben-Shitrit utilizes movement and bodies to implicate the powers that be, their mechanisms of domination and the potential for violence. Pulling from manifold historical and literary sources, Orit addresses the personal and contemplates the national in textured imagery. She engages in three main topical themes: cycles of violence in the Middle East; abstract systems of political, religious and economic control; and conflicted beings trapped in bodies. In her videos Ben-Shitrit places the individual in the midst of a series of events—rituals, struggles, exorcisms—addressing the complex and covert rules of power. Orit has recently shown at MACRO Museo d’arte contemporanea Roma; the Haifa Museum of Art; the Royal College of Art, London; Anna Kustera Gallery and the Nathan Cummings Foundation, New York; Mana Contemporary, Miami; Videobrasil in São Paulo (2011, 2013); The 3CL, Luxembourg. She is the recipient of a film commission for Experimental Media and Performing Arts Center (EMPAC) in 2013-2015, a recent Lower Manhattan Cultural Council Swing Space resident, and a 2012 New York Foundation for the Arts Fellow in Film/Video.

Rainer Ganahl is a New York based artist who has been shown internationally including the Venice Biennial (1999, 2007, 2009) the Shanghai Biennial (2008) and the Athens Biennial (2013). His artistic work often deals with the forms and content of education and politics at the intersection of linguistic and class issues. Recent solo exhibitions held in New York took place at White Columns (Commes Des Marxists, 2013) and Kai Matsumiya (El Mundo, 2014 and Seminars/Lectures: Recent Artists, 2015), where the artist is currently represented. Additionally, Ganahl recently opened a solo exhibition at Hacienda, Zurich, at BCP, Shanghai, and at Cabaret Voltaire, Zurich. Ganahl is currently preparing a larger exhibition at the renowned Dutch space De Vleeshal, Middelburg and De Apple, Amsterdam.

Mary Notari is a multidisciplinary theater artist based in Brooklyn. As an actor, singer, and puppeteer, she has performed in many independent theater productions in NYC and beyond including: Harlem Arts Festival, LaMama ETC, Dixon Place, The Bushwick Starr, and the Detroit Institute of Arts Museum. She is an alum of the emerging artists program, EMERGENYC, at the Hemispheric Institute as well as the LAByrinth Theater Company’s Ensemble Workshop. With the Yes Lab, she has consulted and led workshops for activists in culture jamming and creative direct action. Her solo work often draws on gender expression, cabaret, and her abiding love of geek culture.

Xin Wang is a curator and researcher based in New York. A recent graduate from Columbia University’s MA program in Art History, she has worked as a special exhibition researcher at the Metropolitan Museum of Art on projects such as Ink Art: Past as Present in Contemporary China (2013). She was the associate curator for Asian Contemporary Art Week 2014 and the inaugural edition of its signature program FIELD MEETING. As an independent curator, she has co-organized the panel “Magiciens de la Terre and China: Looking Back 25 Years” with Asia Art Archive at Columbia University, curated the New York solo debut of artist Lu Yang (2014), and presented a critically-acclaimed group exhibition “THE BANK SHOW: Vive le Capital” (2015) in Shanghai. Her writing has frequently appeared on exhibition catalogues (including the 2015 Venice Biennale, retrospective of artist Liao Guohe) and publications such as Artforum, Art in America, Flash Art, the Metropolitan Museum’s blog, Hyperallergic, and Leap. Aggregating aesthetics and cultural production pertinent to Asian/alternative futurism at http://afuturism.tumblr.com/

Zhang Hongtu is an artist who has lived and worked in the United States since 1982. He was born into a Muslim family in Gansu, China in 1943 and graduated from the Central Academy of Arts and Crafts in Beijing in 1969. From the middle of the 1980s to the ’90s, Zhang created paintings, sculptures and mixed media installations utilizing Mao’s image to express his ideas about Communist China and the Cultural Revolution. In the last decade, Zhang’s works have come to question complex relationships between the traditions of old China and the customs of the modern West. His most recent works focus on the relationship between nature and the human condition. Zhang has exhibited extensively, including shows at the Havana Biennial, the PS1 Museum, the New Museum, the Guangzhou Triennial, the Princeton University Art Museum, the Kaohsiung Museum of Fine Arts and the Museu Picasso. Zhang Hongtu is currently enjoying the first U.S. survey of his work at the Queens Museum.

Mo Zhou is a stage director based in New York City. She has worked at the Oregon Shakespeare Festival, Williamstown Theatre Festival, the Glimmerglass Festival, Opera Theatre Pittsburgh, Manhattan School of Music, and Simpson College Opera. As the winner of the 2013 OPERA America Robert L.B. Tobin Director-Designers Showcase, Ms. Zhou presented her new production concept of Carlisle Floyd’s “Susannah” at the annual Opera Conference in Vancouver, Canada. The final model and renderings are on exhibit at the National Opera Center in New York City. In the summer of 2015, Ms. Zhou joins the prestigious Merola Opera Program as the Apprentice Stage Director with San Francisco. She will join the Juilliard School as the Marcus Directing Fellow in the coming fall. Ms. Zhou graduated from Bowdoin College with a degree in English and received her MFA degree in stage directing from Columbia University, under the tutelage of Anne Bogart.